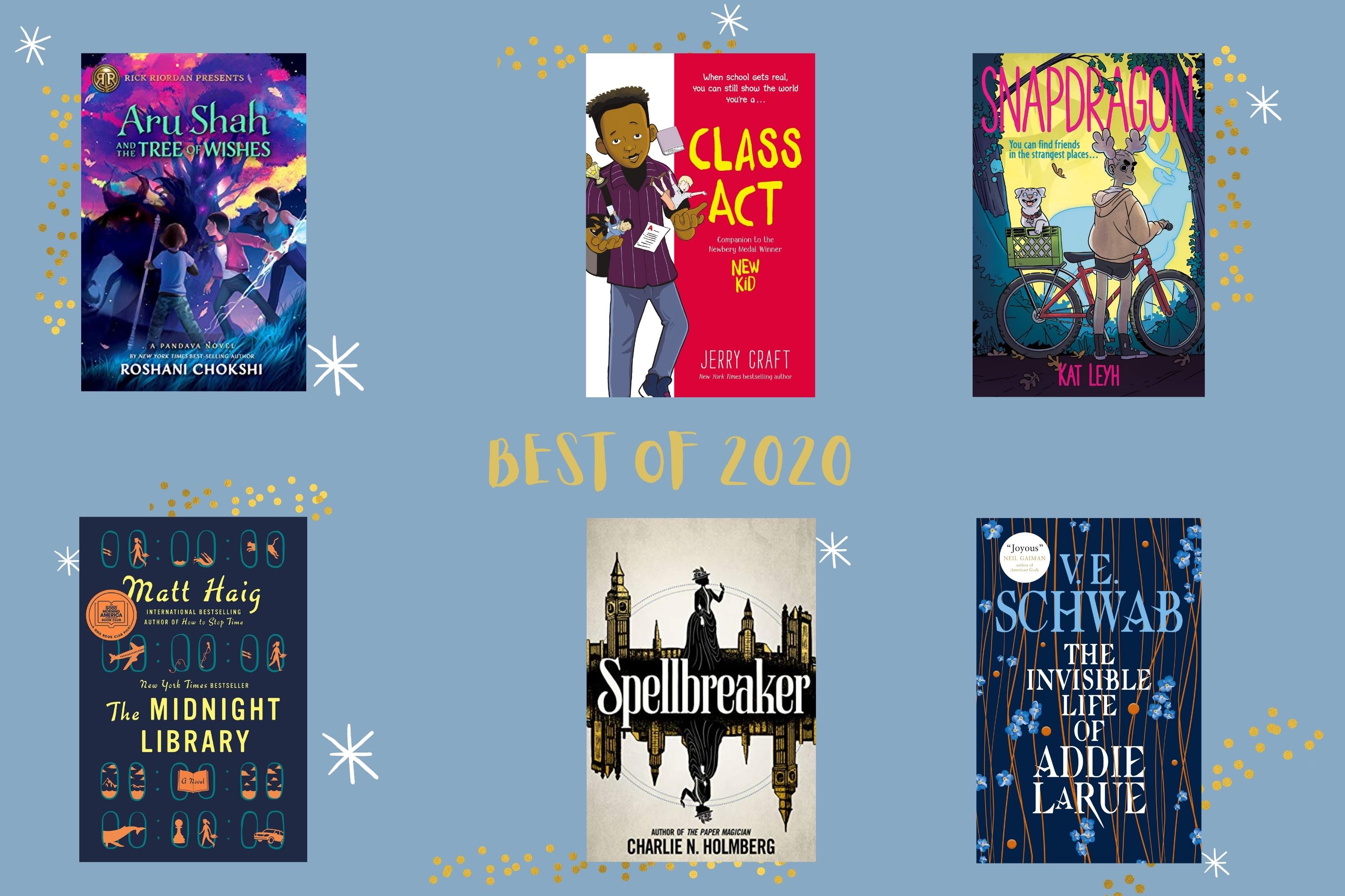 We’ve experienced a lot of changes this year, but one thing that did not change was the amazing selection of books published in 2020. From children's picture books to young adult fantasies this year provided something for all.

Picture books invite readers to think about big topics like kindness and friendship and also help us make sense of specific events like a beloved friend moving away or what happens on a dog walk. These are the perfect blend of story and illustration, picture books lend themselves to a wide variety of readers. Little ones can enjoy the rhyming text and older readers can explore illustrations in detail to pick up some of the more subtle messages the story gives. It is always great for older children to explore their reading in readers or chapter books, but there is magic in enjoying a picture book together.

For adults, this year's fiction introduces us to many memorable characters and expands on award-winning series. Whether you’re looking for something quirky and sweet or want to delve into the ramifications of a Faustian bargain, 2020 releases allow readers to escape into new worlds.

Below our staff shared their favorite books of the year- did your favorite make the list?

Are You Eating Candy Without Me? by Jenny Draga Malesevic

In this delightfully illustrated picture book, readers explore the original FOMO (Fear of Missing Out) as four children imagine what wild, zany, and impossible adventures the adults in their lives must surely get up to when they are not with them.

What We'll Build by Oliver Jeffers

A father and his young daughter gather their tools and begin building a future where love can be set aside until it is needed, enemies become friends, and exploration is key. - (Baker & Taylor)

A tale inspired by the Japanese art form of kintsugi follows the experiences of a beloved stuffed fox that is swept from its young owner by a storm and lovingly repaired by a girl who is recovering from an injury before she endeavors to return the toy to its home. Illustrations. - (Baker & Taylor)

Evelyn Del Rey is Moving Away by Meg Medina

Evelyn Del Rey is Daniela’s best friend. They do everything together and even live in twin apartments across the street from each other: Daniela with her mami and hamster, and Evelyn with her mami, papi, and cat. But not after today, not after Evelyn moves away. Until then, the girls play amid the moving boxes until its time to say goodbye, making promises to keep in touch, because they know that their friendship will always be special. --Provided by publisher.

The Walk by Celia Sacido

Told only through illustrations, this book recounts what a man and his dog encounter while out for a walk.

Me and Mama by Cozbi Cabrera

With lyrical prose and a tender touch, Mama and Me is an ode to the strength of the bond between a mother and a daughter as they spend a rainy day together. - (Simon and Schuster)

Aru Shah and The Tree of Wishes by Roshani Chokshi

After fourteen-year-old Aru Shah and her friends fail to keep a prophecy from the Sleeper, they undergo a rebranding campaign to prove the Pandavas's trustworthiness, but Aru believes they need to focus on finding the Tree of Wishes before the Sleeper and stopping war between the devas and the demons. - (Baker & Taylor)

Sal and Gabi Fix the Universe by Carlos Alberto Hernandez

When best friends Sal and Gabi try to repair the damage they created when they altered the universe to help their families, they end up creating even more chaos.

We Dream of Space by Erin Entrada Kelly

The Hart family of Portland, Oregon, faces many setbacks after Ryan's father loses his job, but no matter what, Ryan tries to bring sunshine to her loved ones. - (Baker & Taylor)

In the midst of the search for the truth and the search for April is a growing force, something that wants to capture our consciousness and even control our reality. A Beautifully Foolish Endeavor is the bold and brilliant follow-up to An Absolutely Remarkable Thing. It is a fast-paced adventure that is also a biting social commentary, asking hard, urgent questions about the way we live, our freedoms, our future, and how we handle the unknown. - (Penguin Putnam)

Befriending an eccentric but savvy older woman who suggests that they help each other while raising a litter of orphaned baby opossums, a young girl discovers that the woman may possess real magic and a possible connection to her family. - (Baker & Taylor)

The Tea Dragon Society is the two-time Eisner Award-winning gentle fantasy that follows the story of a blacksmith apprentice, and the people she meets as she becomes entwined in the enchanting world of tea dragons.

Coretta Scott King Honor author Varian Johnson teams up with rising cartoonist Shannon Wright for a delightful middle-grade graphic novel! Maureen and Francine Carter are twins and best friends. They participate in the same clubs, enjoy the same foods, and are partners on all their school projects. But just before the girls start sixth grade, Francine becomes Fran -- a girl who wants to join the chorus, run for class president, and dress in fashionable outfits that set her apart from Maureen. A girl who seems happy to share only two classes with her sister! Maureen and Francine are growing apart and there's nothing Maureen can do to stop it. Are sisters really forever? Or will middle school change things for good?- (Scholastic)

Eighth grader Drew Ellis recognizes that he isn't afforded the same opportunities, no matter how hard he works, that his privileged classmates at the Riverdale Academy Day School take for granted, and to make matters worse, Drew begins to feel as if his good friend Liam might be one of those privileged kids and is finding it hard not to withdraw, even as their mutual friend Jordan tries to keep their group of friends together. - (Baker & Taylor)

The orphaned Elsie Camden learned as a girl that there were two kinds of wizards in the world: those who pay for the power to cast spells and those, like her, born with the ability to break them. But as an unlicensed magic user, her gift is a crime.

The Last Emperox by John Scalzi

The collapse of The Flow, the interstellar pathway between the planets of the Interdependency, has accelerated. Entire star systems--and billions of people--are becoming cut off from the rest of human civilization. This collapse was foretold through scientific prediction . . . and yet, even as the evidence is obvious and insurmountable, many still try to rationalize, delay and profit from, these final days of one of the greatest empires humanity has ever known.

The Secret Chapter: an Invisible Library Novel by Genevieve Cogman

In the latest novel in Genevieve Cogman's historical fantasy series, Irene and Kai have to team up with an unlikely band of misfits to pull off an amazing art heist--or risk the wrath of the dangerous villain with a secret island lair. A Librarian's work is never done.

Taken hostage by a failed bank robber while attending an open house, eight anxiety-prone strangers--including a redemption-seeking bank director, two couples who would fix their marriages, and a plucky octogenarian--discover their unexpected common traits.

The Midnight Library by Matt Haig

Between life and death, there is a library. When Nora Seed finds herself in the Midnight Library, she has a chance to make things right –  to live as if she had done things differently. But things aren’t always what she imagined they’d be, and before time runs out, she must answer the ultimate question: what is the best way to live?

The Invisible Life of Addie LaRue by Victoria Schwab

In a moment of desperation, a young woman makes a Faustian bargain to live forever – and is cursed to be forgotten by everyone she meets. The extraordinary life of Addie LaRue is a dazzling adventure that plays out across centuries and continents, across history and art, as a young woman learns how far she will go to leave her mark on the world. But everything changes when, after nearly 300 years, Addie stumbles across a young man in a hidden bookstore who remembers her name.

The House in the Cerulean Sea by TJ Klune

An enchanting story about the profound experience of discovering an unlikely family in an unexpected place—and realizing that family is yours. When Linus, a Case Worker at the Department in Charge Of Magical Youth, is unexpectedly summoned by Extremely Upper Management, he's given a curious and highly classified assignment: travel to Marsyas Island Orphanage, where six dangerous children reside: a gnome, a sprite, a wyvern, an unidentifiable green blob, a were-Pomeranian, and the Antichrist. Linus must set aside his fears and  make a choice: destroy a home or watch the world burn.

You know that feeling when you’re at work, and you’ve had enough of people, and then the boss walks in with yet another job that needs to be done right this second or the world will end, but all you want to do is go home and binge your favorite shows? And you're a sentient murder machine programmed for destruction? Congratulations, you're Murderbot. Come for the pew-pew space battles, stay for the most relatable A.I. you’ll read this century.

Into the Fire (Orphan X #5) by Gregg Andrew Hurwitz

Evan Smoak lives by his own code. Once he was known as Orphan X. Taken from a group home at age twelve, Smoak trained as an off-the-books government assassin. But he broke free and reinvented himself as The Nowhere Man, a figure shrouded in mystery, known for helping the truly desperate.

Quirky and sweet! Ulf Varg (translated to Wolf Wolf) heads up Malmo, Sweden’s Department of Sensitive Crimes. They handle cases that are too obscure and/or irrelevant for the regular police department. The cast of characters is charming and their interactions are sweet, sad, hilarious and engaging, often all at once. This is the second of a series and there is a new one due in 2021.

After Sundown by Linda Howard

Sela Gordon lives in the Smoky Mountains of Tennessee. Shy and unassuming, she notices the mysterious ex-military man living alone and away from the small town she lives in. When a powerful solar storm takes out the power grids across the world, she and the others in isolated valley must band together to maintain order and stay alive. Sela and the military man become the leaders in the small community while fighting outsiders and fighting their growing feelings for each other.

You Never Forget Your First by Alexis Coe

A biography of George Washington unlike any others. Exploring frenemies, families, and life beyond the battlefield, Coe places Washington as a relatable man rather than an unattainable military hero. George Washington was so much more than a military general and our first president. He had a complicated family that today would be considered blended, a revolutionary idea for his time. We often assume we know Washington the man, but in reality we know the myth of Washington. Coe opens up his history and thoughtfully re-examines our first president in a way that takes him out of the myth and turns him into a real person.