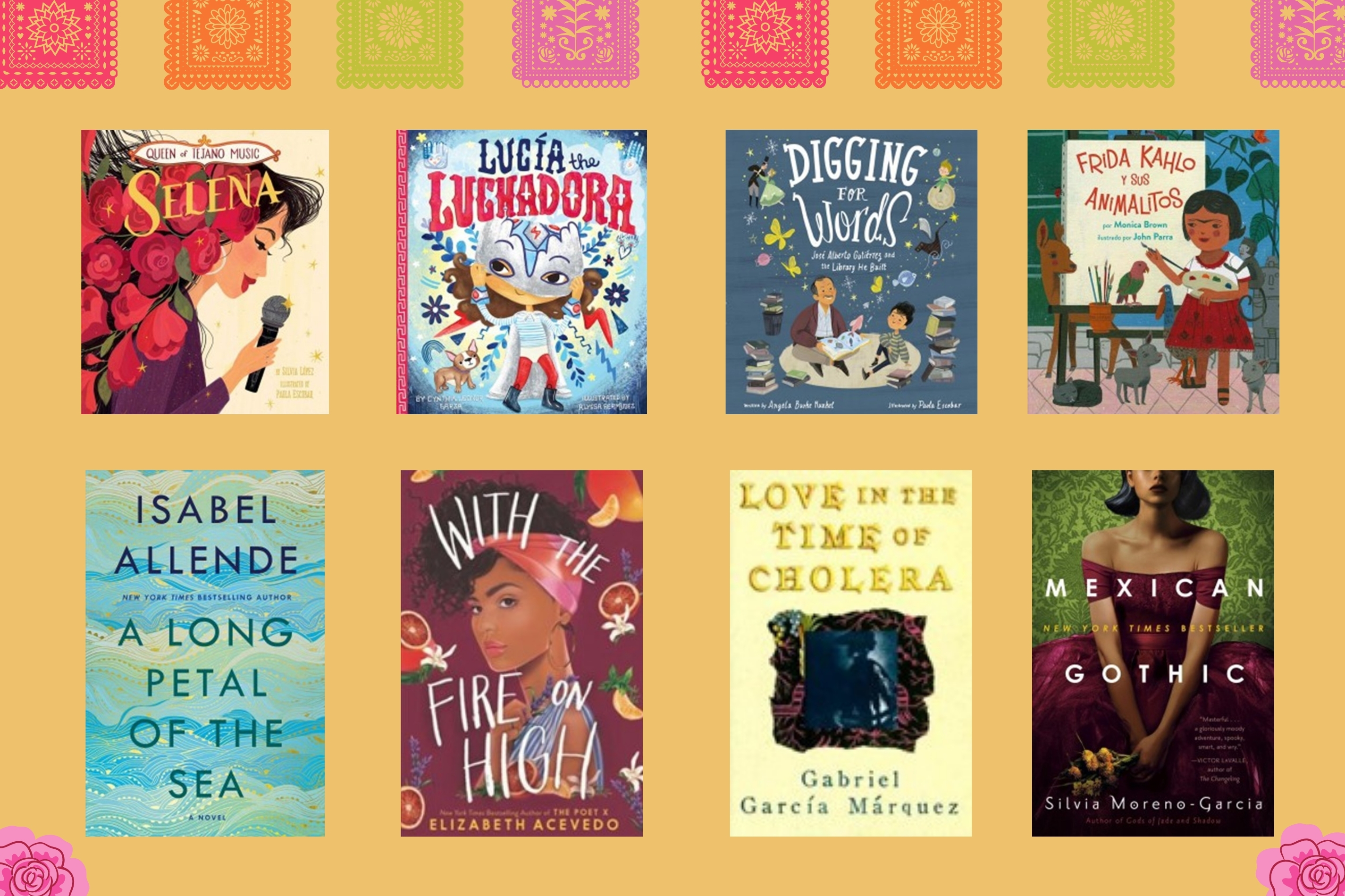 Ceramic animal figurines, fashioned by Mexican artists, demonstrate different colors, which are identified in both English and Spanish. 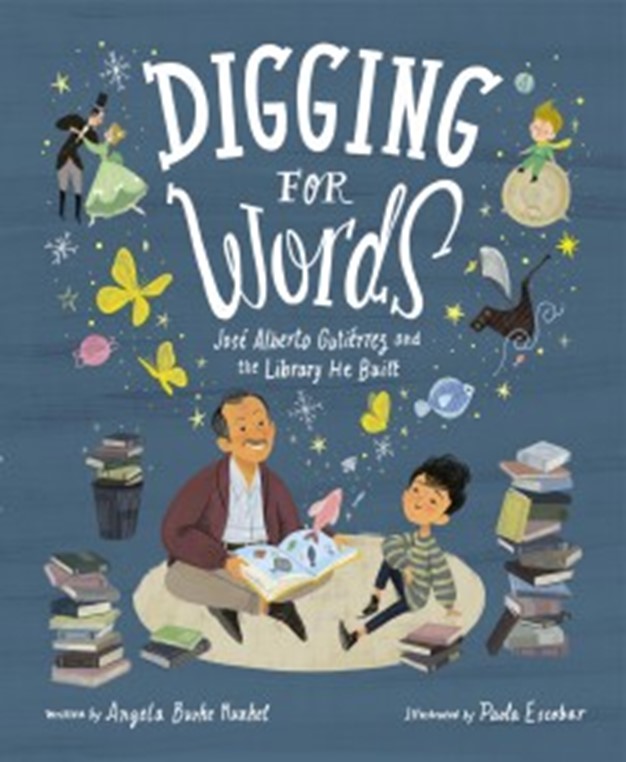 In Bogotá, Columbia, young José eagerly anticipates Saturday, when he can visit the library started by José Alberto Gutiérrez, a garbage collector, and take a book home to enjoy all week. Includes note about Gutiérrez's life and Bogotá. 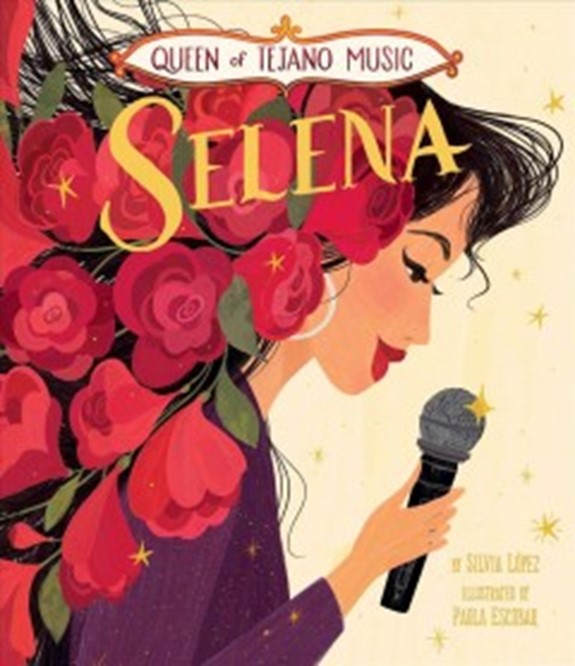 In picture-book format, examines the life and career of Selena Quintanilla, the singer whose success in Tejano music and crossover into mainstream American music opened the door for other Latinx entertainers. 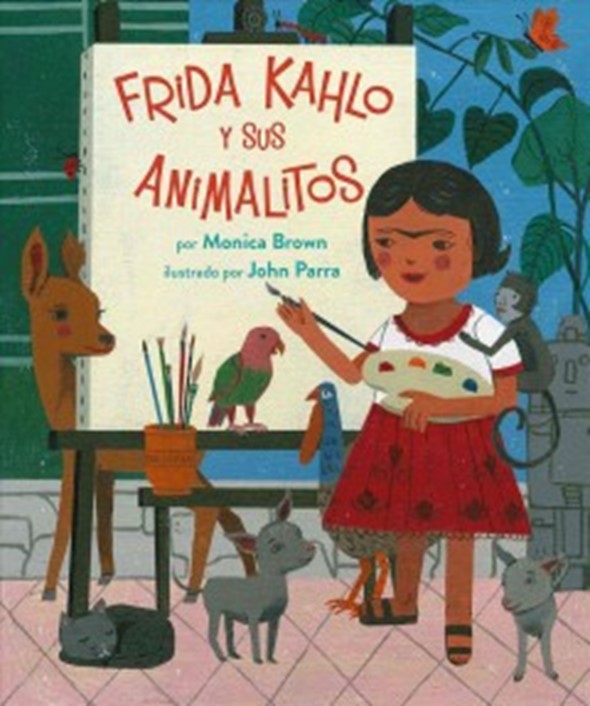 A semi-biographical look at the early life of the famous Mexican artist, this picture book takes special interest in Frida Kahlo’s beloved pets and other animals that inspired her art. In a unique storytelling format, Kahlo’s life and personality are portrayed through her animals with added biographical details and facts about indigenous Mexico. Vibrant illustrations that reflect Frida’s style help to highlight her imaginative work. 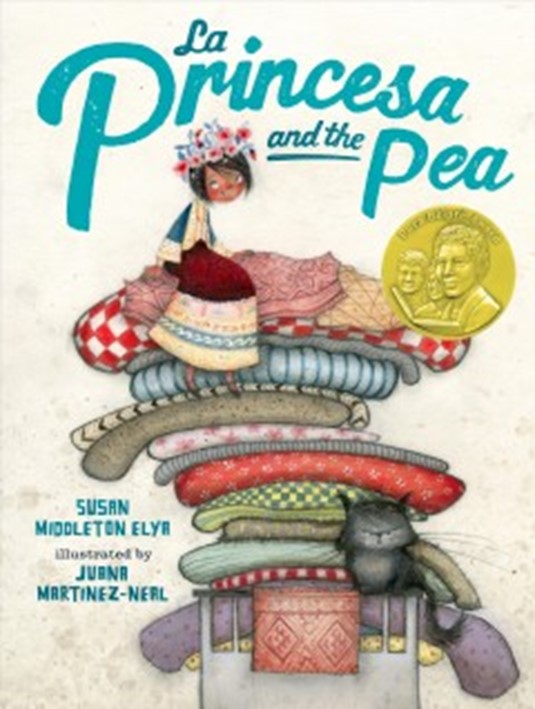 La Princesa and the Pea by Susan Middleton Elya

A rhyming twist on a classic fairy tale in which a queen places a pea under a young lady's mattress to see if she is truly a princess. Incorporates Spanish words and includes a glossary. 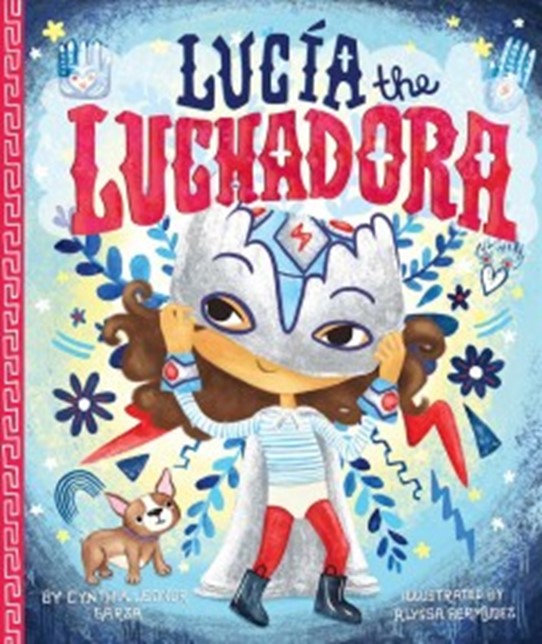 Lucia zips through the playground in her cape just like the boys, but when they tell her 'girls can't be superheroes,' suddenly she doesn't feel so mighty. That's when her beloved abuela reveals a dazzling secret: Lucia comes from a family of luchadoras, the bold and valiant women of the Mexican lucha libre tradition. 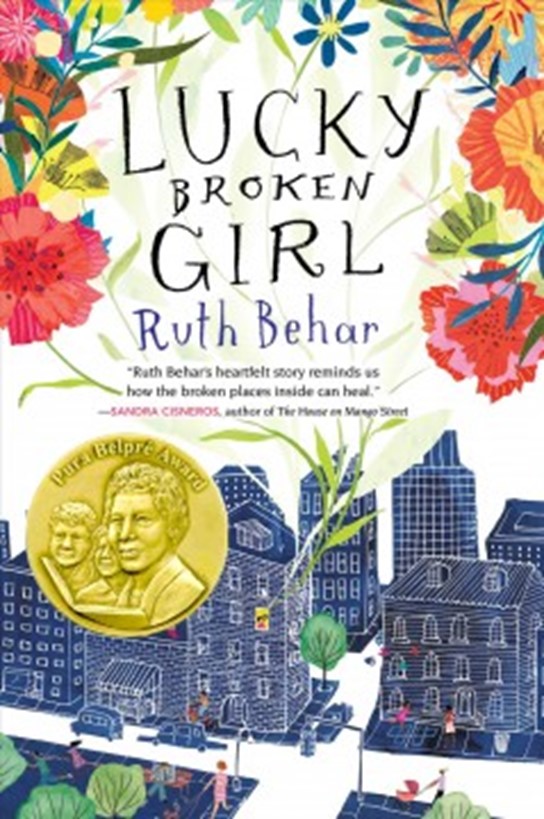 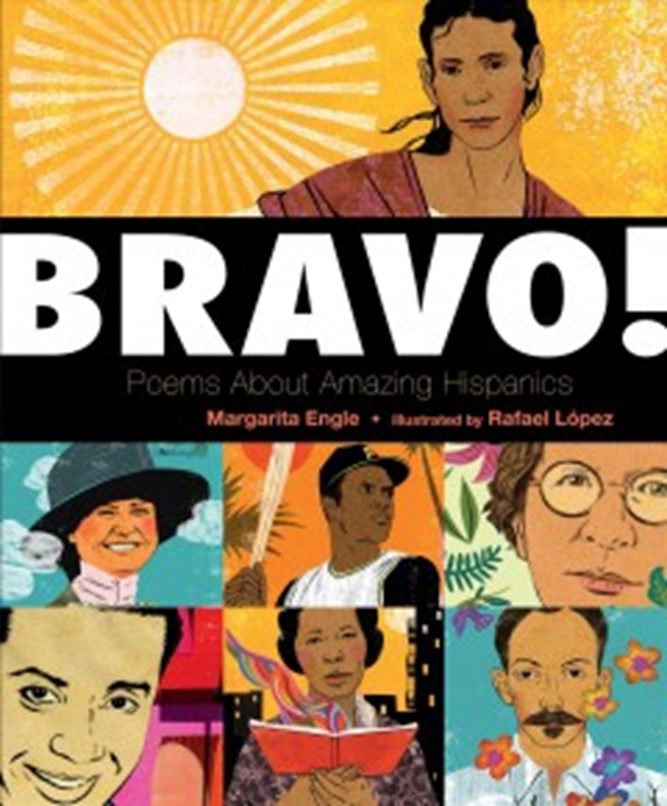 A spunky young girl from Colombia loves playing with her canine best friend and resists boring school activities, especially learning English, until her family tells her that a special trip is planned to an English-speaking place. 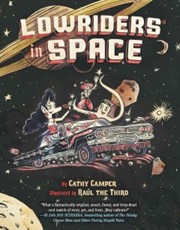 Lupe, Flapjack, and Elirio customize their car into a low rider for the Universal Car Competition to win the cash prize that'll enable them to buy their own garage. 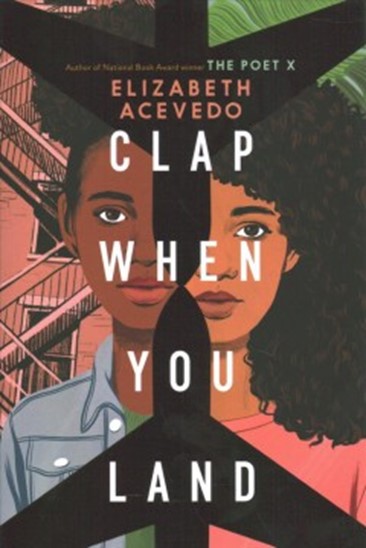 Clap When You Land by Elizabeth Acevedo

Camino Rios lives for the summers when her father visits her in the Dominican Republic. But this time, on the day when his plane is supposed to land, Camino arrives at the airport to see crowds of crying people ... In New York City, Yahaira Rios is called to the principal's office, where her mother is waiting to tell her that her father, her hero, has died in a plane crash. Separated by distance -- and Papi's secrets -- the two girls are forced to face a new reality in which their father is dead and their lives are forever altered. And then, when it seems like they've lost everything of their father, they learn of each other. 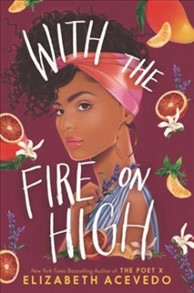 With the Fire on High Elizabeth Acevedo

Teen mother Emoni Santiago struggles with the challenges of finishing high school and her dream of working as a chef. 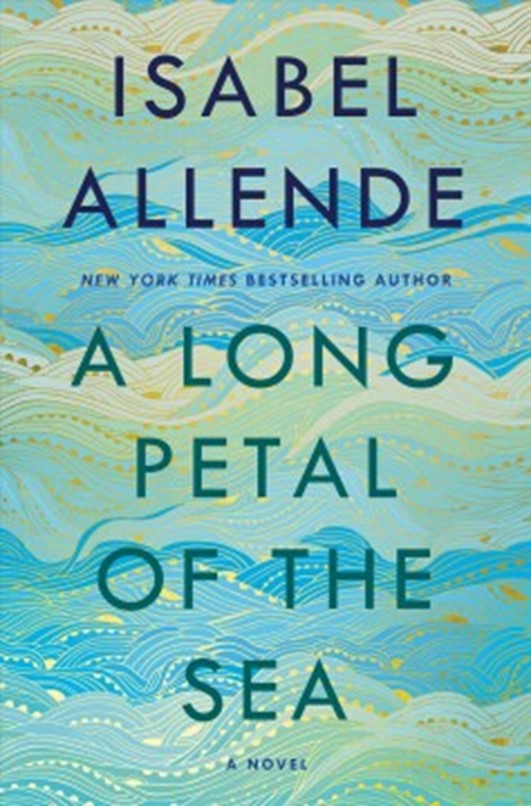 A long petal of the sea : a novel / Largo pétalo de mar by Isabel Allende

In the late 1930s, civil war gripped Spain. When General Franco and his Fascists succeed in overthrowing the government, hundreds of thousands are forced to flee in a treacherous journey over the mountains to the French border. Among them is Roser, a pregnant young widow, who finds her life irreversibly intertwined with that of Victor Dalmau, an army doctor and the brother of her deceased love. To survive, the two must unite in a marriage neither of them wants, and together are sponsored by poet Pablo Neruda to embark on the SS Winnipeg along with 2,200 other refugees in search of a new life. As unlikely partners, they embrace exile and emigrate to Chile as the rest of Europe erupts in World War. Starting over on a new continent, their trials are just beginning. Over the course of their lives, they will face test after test. But they will also find joy as they wait patiently for a day when they are exiles no more and will find friends in the most unlikely of places. Through it all, it is that hope of being reunited with their home that keeps them going. And in the end, they will find that home might have been closer than they thought all along

Set on the Caribbean coast of South America, this love story brings together Fermina Daza, her distinguished husband, and a man who has secretly loved her for more than fifty years. 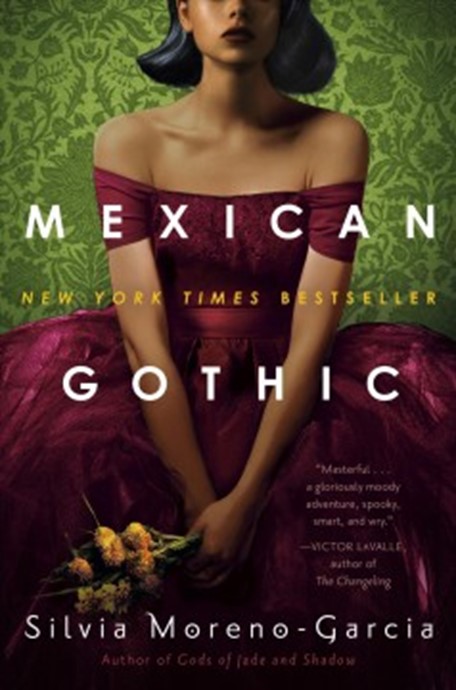 The acclaimed author of Gods of Jade and Shadow returns with a darkly enchanting reimagining of Gothic fantasy, in which a spirited young woman discovers the haunting secrets of a beautiful old mansion in 1950s Mexico