Celebrate the Mid-Autumn Festival with the Arlington Public Library 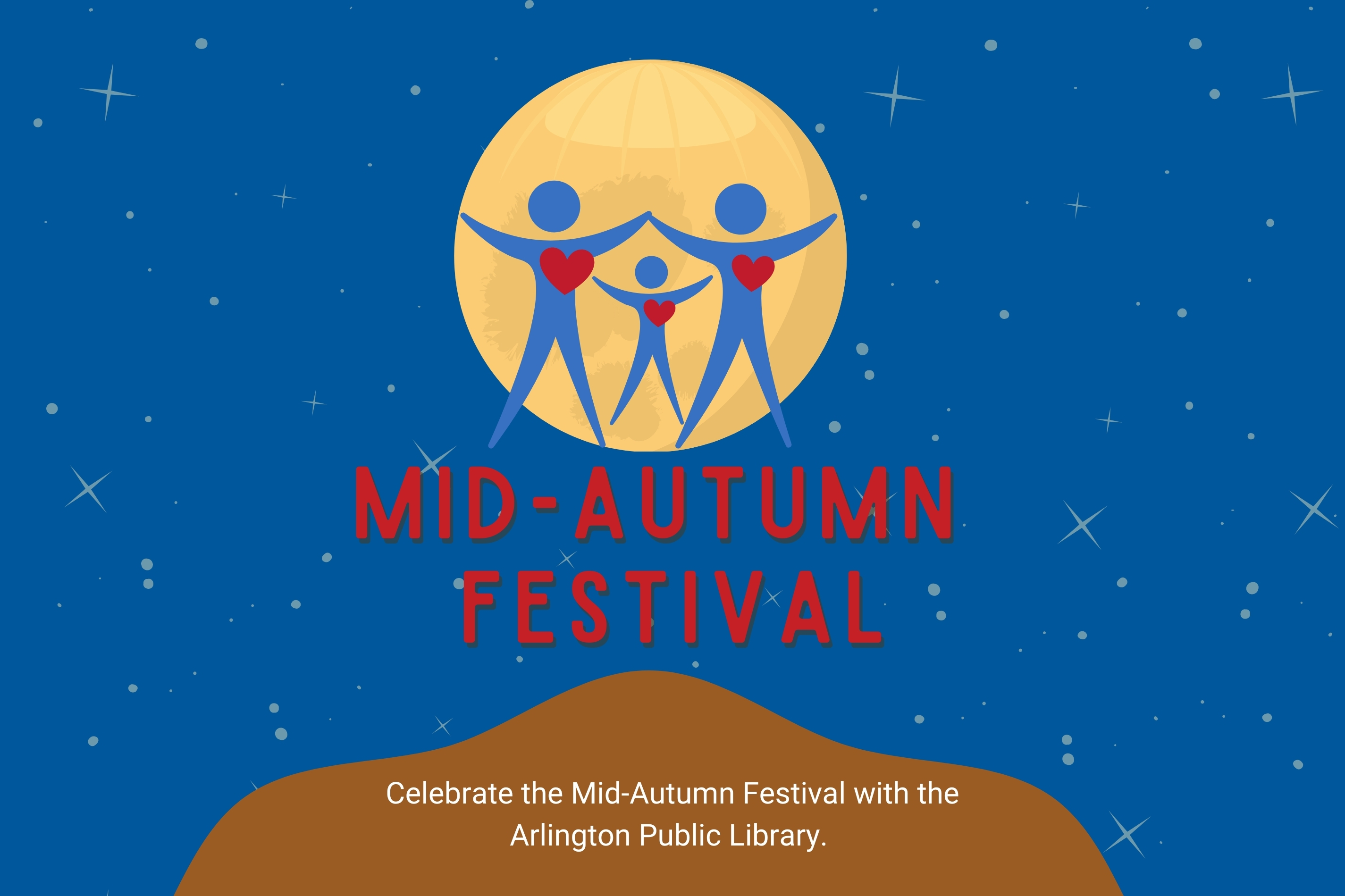 We invite you to celebrate the Mid-Autumn Festival with the Arlington Public Library. This holiday is observed in many countries in Asia. It occurs on the 15th day of the 8th month of the lunar year, which follows the cycles of the moon. As a result, its date will be different every year on the Gregorian calendar, which is what is used in the United States. The holiday generally falls sometime in September or October.

Other names for the holiday include:

There are a few legends about how the Mid-Autumn Festival began. In the United States, there is a folktale about a man living on the moon. In East Asian folklore, one of the residents on the Moon is a rabbit who pounds a mortar and pestle. The contents inside vary depending on the culture. In some stories, the rabbit is making the elixir of life for Chang E, the Moon Lady. In other versions, he makes mochi or medicine. How the rabbit arrived on the moon is because of his pure and giving heart.

In another legend, an old man approaches a monkey, a fox, and a rabbit to ask for food. The monkey gives him fruit, the fox brings fish, but the rabbit, who can only bring grass, decides to throw himself into the fire to feed the old man. The old man stops him and touched by the rabbit’s selflessness, reveals himself as an immortal deity. He grants immortality to the rabbit, and the rabbit is raised to the moon to live the rest of his life.

How the holiday is celebrated depends on culture. In China, it is one of the biggest holidays, second only to the Lunar New Year. Traditionally in Chinese culture, scholars would write riddles on a special type of paper lantern. People would then take turns trying to solve the riddles. These lantern riddles could also be found during the Lantern Festival on the 15th day of the 1st month of the lunar year.

Like Thanksgiving, the Mid-Autumn Festival originated as a harvest festival. In the past, it was a time when people would celebrate the end of the harvest season. Even today, many people will gather, make lots of delicious food, and pray.

Mooncakes are a large part of the celebration for many of the countries and cultures that celebrate it. There is a folktale that at the end of the Yuan Dynasty (1271-1368), the Han Chinese who lived under Mongol rule wanted to overthrow the Mongols and return to Chinese rule. Chu Yuan-chang and Liu Po-wen came up with an ingenious idea. Because they needed to spread the word secretly and give rebels time to gather weapons, they spread rumors of a plague that was spreading throughout the land. The only way to be protected against the plague was to eat mooncakes. The mooncakes were only sold to the Han Chinese. Inside the mooncakes were a message with the date they would rebel: the 15th day of the 8th month of the lunar year.

There are other versions of how the mooncakes helped to spread the message. Since they were sold in boxes of four and typically shared among family members, a puzzle design was used. When the four mooncakes were cut into four pieces each, the sixteen pieces turned into puzzle pieces that revealed the date of the rebellion.

Today, the designs on mooncakes are for aesthetic purposes instead of for rebellion. They are packaged beautifully and have multiple flavors. They are also often gifted to clients, employees, friends, or family in the days leading up to the festival.

This year, the Mid-Autumn Festival is on Thursday, Oct.1. Arlington Public Library has created a take-it-and-make-it kit to accompany the holiday. Sign up for the kit on our program calendar, then pick up your kit on Wednesday, September 30, between 10 a.m. and 5 p.m. at the Southwest Branch Library. The kit consists of three crafts related to the Mid-Autumn Festival. Each family will also receive a copy of Noodle Magic by Roseanne Greenfield Thong. Please note that the kit is recommended for ages 5 and older, as it contains small parts. Also make sure to join us Wednesday, Sept. 30 at 6:30 p.m. as we celebrate the Mid-Autumn Festival through a virtual program! We will be reading a story, learning some facts about the Festival, and doing an activity together. This virtual program will be available on our Facebook.

The Mid-Autumn Festival is a very special holiday that honors the importance of family, much like Thanksgiving. We hope you have enjoyed learning about it!